Getting Around the French Quarter 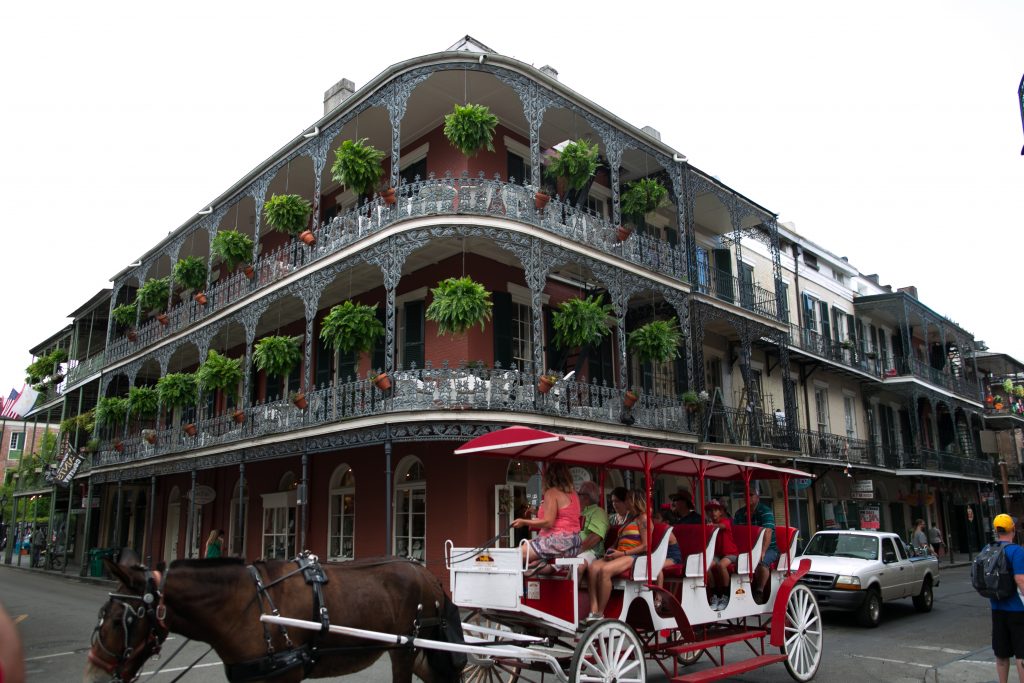 When you’re staying in the French Quarter, you’ll pretty much be able to walk to all of your destinations. The terrain is flat (if pot-holed) and the streets are laid out in a grid that makes sense. With all its architectural wonders and magic, this 300-year-old neighborhood is simply best taken in while explored on foot. The next best thing would be to bike or hail a pedicab.

If you’re traveling to any destinations outside the French Quarter though, getting yourself from point A to point B might be best done by car, and, depending on where you’re going, by public transportation. Public transit here is pretty reliable but doesn’t thoroughly cover all New Orleans neighborhoods.

Still, there are plenty of other modes of transportation you can use to navigate the city confidently and comfortably. Here, we cover the best transportation options for getting around and in and out of the French Quarter.

Walking
As we mentioned, the Quarter was made for walking. It’s the best way to explore all it has to offer: The area is flat, relatively small, the street layout is easy to navigate, and every block is jam-packed with buildings and businesses worth exploring. Just like in any metro area, just be aware of your surroundings, especially after dark, and exercise common sense when it comes to walking in less populated areas.

By Car
Driving and parking in the French Quarter can be a hassle, especially during big events. For example, come Mardi Gras weekend the French Quarter is closed to vehicular traffic except to residents and hotel guests with special parking passes, and parking violations are vigorously enforced. The parking lots also fill up fast during parades and festivals, and tend to charge more than usual. Since street parking and the commercial lot parking options are limited in the French Quarter, and hotel parking could get pricey, we’ll say that it would only make sense to rent a car if you are staying for a while, or plan to travel outside the Quarter and the city limits.

If you end up driving in New Orleans please pay attention to where it’s legal to make a right turn on red, and where you’ll have make a U-turn instead of turning left on an intersection. Rules vary from state to state, and Louisiana has its own restrictions.

That said, you’ll easily find all major car-rental agencies, including at the airport and throughout in the city. To make parking more manageable, you can download the ParkMobile app to reserve parking, pay for it via your smartphone, and add time to your meter remotely.

Taxicab and ride-share services
The ride-share options in New Orleans include Uber and Lyft (you can download their apps at the links). There’s also handful of taxicab services. We recommend United Cabs, Inc. (504-522-9771) or New Orleans Carriage Cab, (504-207-7777). You can also use the United Cabs Passenger app to book.

Even during the busiest times in the French Quarter the taxicabs are plentiful. If you can’t find one quickly enough, you can walk to the nearest bigger hotel where they usually line up. All cabs have been upgraded a few years ago to feature GPS and credit card machines.

By bus
The city buses run every 30 minutes on average on weekdays (less often on weekends) and have special schedules on holidays. While the New Orleans public transportation system is not as comprehensive as the transit in some other U.S. cities, it costs $1.25 one-way (a transfer costs 25 cents), and the buses run all over the city. You can see the maps and the schedules here.

To pay the fare on the bus, you must have exact change, but you can also buy passes. A Jazzy Pass is available for one, three, five, and 31 days and is valid for unlimited rides on buses and streetcars. You can get the passes via the GoMobile app, online, and at the ticket machines. There are two in the French Quarter: at Canal and N. Peters streets, and at Canal and Bourbon.

Another option is the Hop On Hop Off bus tours by City Sightseeing. They are a great way to cover large swaths of the Quarter, Garden District and CBD. These open-top double-decker buses run every 30 minutes on a two-hour loop, and you can get off at any designated stop and then get back on a different bus anytime. The unlimited one-day pass is $39 for adults and $10 for kids under 12. The best deal is unlimited three-day pass for $49, because it includes two guided walking tours of the French Quarter and the Garden District.

By streetcar
While you’ve probably heard of, or maybe even taken, the St. Charles streetcar through the majestic sights of Uptown and the Garden District, there are a few other streetcar lines that can help you navigate the French Quarter and beyond. The fares are the same as for the buses mentioned above.

The Canal Street/City Park/Museum line goes to City Park and the New Orleans Museum of Art; the Canal Street/Cemeteries line also goes to Mid-City and ends at the cluster of cemeteries on the edge of Lakeview. You can take the Riverfront line to Harrah’s casino and the riverfront. The most recent addition, the Rampart/St. Claude line, runs along the edge of the French Quarter on Tremé side and can take you to the many art galleries, music venues and restaurants of the bustling St. Claude Avenue.

To hop on the visitor favorite, the St. Charles Avenue streetcar, walk to Canal and Carondelet streets (directly across Canal from Bourbon St. in the French Quarter) and look for the iconic green car. They stop on every block and run from every eight to 20 minutes, depending on time of day and night.

By carriage
Every day from about 8 a.m. to midnight, you can find the mule-drawn carriages lined up on the 700th block Decatur Street in front of Jackson Square. Some carriages hold up to six people, others are smaller. The tours offered depend on the company, but expect a general tour of the Quarter, rain or shine.

By bike and scooter
The next best thing after walking is to bike around the French Quarter. Again, the grid and the flatness allow it, just watch out for the potholes and stay in the bike lane when possible. A few French Quarter businesses offer bike rentals, sometimes along with the scooters, tours, and bike repairs. Rates vary depending on whether it’s a short- or long-term rental, and usually include the lock and the helmet. While it’s not illegal to not wear a helmet in Louisiana it’s still recommended.

Here are some bike rentals to check out in the French Quarter and within walking distance from the Quarter in the nearby Marigny:

Another option is to rent from the bike-sharing system called Blue Bikes, which was launched by the city in 2018 and now offers more that 500 characteristically blue bikes via about 60 hubs scattered all over the city (you can find the French Quarter hubs on the map on the company website). After you sign up online, you can just grab any bike off the rack and then drop it off wherever you need to be, at any other hub or rack in the city within the system. The rate includes the lock but not the helmet. The rates come in three tiers: prorated pay-as-you-go ($8/hour; $0.10/min, plus one-time $5 signup fee); $15 monthly for an hour of ride each day and then prorated after one hour; and the student plan for $10 a month, or $120 annually.

By pedicab
The pedicabs became a more frequent sight in the French Quarter in the last few years, and are easy to hail or request by phone. They are the rickshaw-like tricycles, and a convenient way to cover a short distance. The average rate is $5 per person for the first six blocks and $1 per person for each additional block. We recommend:

By ferry
The Canal Street/Algiers Ferry is the best way to get to Algiers Point across the Mississippi River and to take in the river views. The ride only takes about 25 minutes. The ferry runs every 30 minutes and costs $2 (cash only; $1 for seniors). No cars are allowed (but the bikes are). If you don’t want to a take a lengthier and more expensive river cruise, this ferry cannot be beat for the views it affords on the city skyline and the river. The city is currently working on the ferry overhaul, so we should expect a new terminal and the new vessels by next year (2020).

Getting to and from the airport
You can get the shuttle service from the airport that will deliver you to where you’re staying in the French Quarter, for $24.00 per person. Airport Shuttle Inc. is a minibus/van service located at baggage claim. To book your ride, click here. Look for white vehicles with yellow “Airport Shuttle” lettering on the side.

Taxicabs and ride-share services like Uber and Lyft are available as well. You can look for the signs at baggage claim. Rates start at $33 per person.