What to Do in the French Quarter in April

March 24, 2017
by jayval@frenchquarter.com
in
fun things to do in new orleans New Orleans attractions 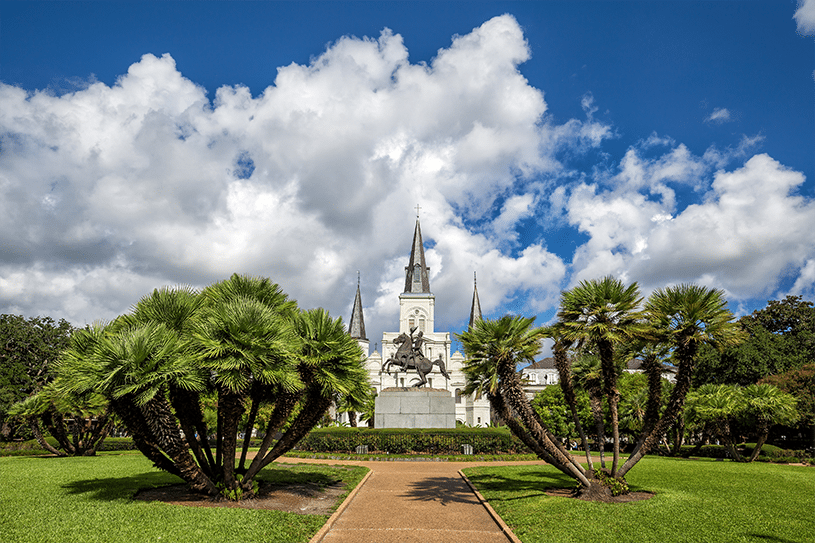 Don’t spread this around too much, but April might just be the best time to visit New Orleans. The city has recovered from its massive Mardi Gras hangover, crawfish season is in full, spicy swing and the weather is just about as perfect as it gets, with average highs hovering in the mid-70s. If that’s not incentive enough, April is a month jam-packed with music, food, parades, festivals…you know, all the stuff that makes New Orleans so New Orleans. Best of all? You don’t have to venture outside the French Quarter to enjoy the best the city has to offer, and many of these events don’t cost a dime. Just bring a sense of joie de vivre and let the good times roll.

Situated on Rampart Street, which forms the French Quarter’s northern boundary, Armstrong Park (901 N. Rampart St.) is a shady, sprawling urban park with water features and a statue tribute to Satchmo–and in April, it hosts the first annual Treme Crab Festival. You’ll find music by Rebirth Brass Band, Little Freddie King, Treme Brass Band and more at the free weekend events. And did we mention food? The festival is a tribute to the Louisiana’s most delicious saltwater crustacean. Enjoy crabs blended into dip by Chef Don Harding, boiled by Louisiana Direct Seafood, folded into ravioli by Voleo’s Seafood Restaurant…the list goes on.

It’s the largest free music festival in the South, when more than 1,700 musicians take over 23 stages scattered throughout the Vieux Carre and commence to rock out. There’s a preponderance of jazz, zydeco, New Orleans funk, brass bands… pretty much every form of music native to Louisiana and the delta gets a chance to shine in front of more than 760,000 attendees. Wear sunscreen and comfortable shoes, because you’ll be doing a lot of walking from stage to stage (not to mention dancing).

Yes, the Crescent City Classic is a 10k that attracts top athletes from around the world, but it’s so much more than a road race. Even if your idea of a workout is walking from Cafe du Monde to Pat O’ Brien’s, you owe it to yourself to check out the race, festival, music and people who have made the Crescent City Classic a New Orleans institution for 37 years. You can run, walk, dance or push a stroller down all or part of its scenic route, which loops from the Superdome, through the Quarter and up Esplanade before ending in a party in City Park. Or you can sit on the sidelines, cheer on the participants and ask yourself how it’s possible for so many people to run while drinking and wearing full costumes. Either way, the Crescent City Classic is a spectacle not to be missed.

Easter is a time for celebration, chocolate bunnies and church services…but in New Orleans, it’s decidedly over the top. Wear your finest pastels, florals, seersucker and hats (the bigger the better) and you’ll fit right in at the city’s three Easter parades. They kick off at 9:45 a.m., when The Historic French Quarter Easter Parade rolls from Antoine’s Restaurant (713 St. Louis St.) to St. Louis Cathedral for 11 a.m. mass. After that, things take a turn for the campy with the Chris Owens French Quarter parade, which celebrates Bourbon Street’s reigning queen (and the hottest septuagenarian to rock sequined bodysuits since Cher). It rolls from Canal and Bourbon streets at 1 p.m. Finally, the Gay Easter Parade closes down the celebrations at 4:30, with floats, throws and dancers galore. Celebrate good times, come on!

If you’re coming to New Orleans during the last weekend in April, you probably already know about the granddaddy of all music festivals, Jazz Fest. From contemporary arena-filling rock stars (Kings of Leon Maroon 5) and rap gods (Snoop Dogg, Pitbull) to pop princesses (Meghan Trainor, Lorde) and living legends (Stevie Wonder, Tom Petty & The Heartbreakers), the festival covers every musical base as it takes over the Fair Grounds Race Course (1751 Gentilly Blvd.). And of course, there’s a hearty assortment of Louisiana acts at the stages. Don’t leave without feasting on food as well as music…crawfish bread, po-boys, muffalettas, boiled seafood, red beans and rice and more are all for sale. Pro tip: rent a bike to cruise right up to the gates–it’s an easy 3.4-mile ride–and wear rubber boots and a poncho if it rains. (You’ll thank us when the dirt race tracks turn to knee-deep mud.)